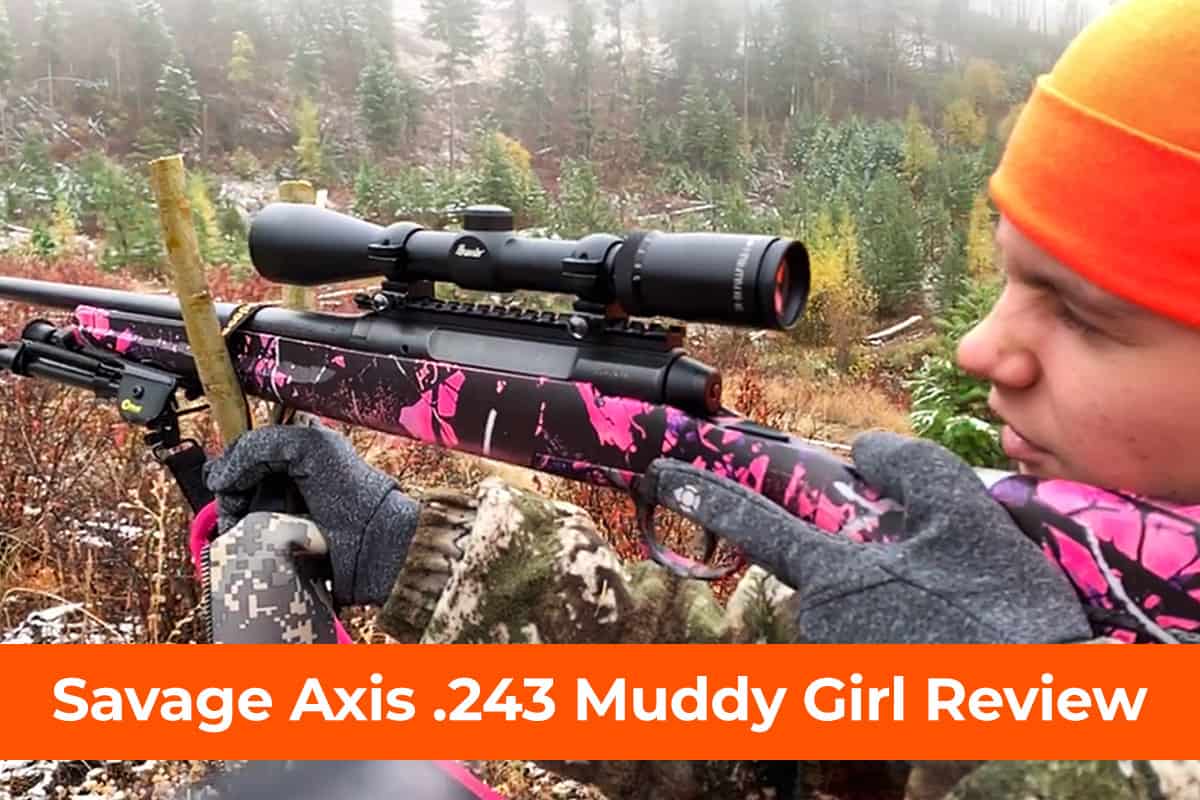 The Savage Axis .243 in Muddy Girl® camo is possibly the best short range, medium-sized big game rifle my family’s ever owned. And whether it’s Muddy Girl camo’s added pink “mojo” or the fact that you can pack this little rifle all day, up and down mountains, with little to no arm fatigue, when it’s time to shoot, this little game-getter … gets game.

The Savage Axis is an entry-level rifle for under $500 that comes with some serious upgrades that used to take a gunsmith and hundreds of dollars to obtain. And that package is hydro dipped in fancy Muddy Girl camo.

If you’re looking to get your daughters or wife interested in hunting/shooting, this “cute” little rifle will get the job done. I’d dare to call it “BOOM BLING”

Amazon and Affiliate Disclosure: As an Amazon Associate I earn from qualifying purchases. Some of the links below are affiliate links, which means we will earn a commission on the products or services you purchase using the links.

First, if you’ve got a daughter, wife, female friend, or significant other that’s into or getting into hunting/shooting, I can think of nothing cooler to entice them and solidify hunting’s “cool” factor than a rifle in Muddy Girl Camo.

I first found Muddy Girl when it was owned, distributed and licensed by Moon Shine Camo’s Lifestyle Camo® line of camo patterns. They’ve since, on September 15, 2018, renamed and rebranded to Sirphis, LLC. (Not quite as cool as “Moonshine”, but I get the need to disassociate themselves from alcohol and get more shooting industry friendly naming)

Sirphis has several camo patterns that they’ve developed, but none has had the mass appeal and explosive adoption and growth that the Muddy Girl camo pattern has. It’s found on everything from Glocks to gun bags and every t-shirt in between!

Savage Arms, in its infinite wisdom, jumped on the Muddy Girl camo country phenomena early and offered its Axis, Axis II, and Axis II Compact rifle stocks in the pattern.

In 2015, I jumped at the chance to buy an Axis Compact for my two daughters for Christmas. And ever since, the little .243 Savage Axis Compact in Muddy Girl camo has become our family’s go-to gun for deer.

It’s one of my favorite features, so let’s start off with how you interact with the Savage Muddy Girl .243—how you make this sweet little rifle go BOOM!

Proper trigger control is a function of practice and the mechanical capabilities of a good quality, properly weighted trigger that won’t accidentally discharge, but also doesn’t cause overtightening of your trigger finger and thus movement of your rifle and sight.

Savage’s AccuTrigger system and the trigger itself has two main parts to address this issue:

And the AccuRelease provides a backup safety mechanism so that jarring the rifle won’t accidentally fire it.

And lucky for us, the new Savage Axis Muddy Girl .243s come with an AccuTrigger. It’s an excellent upgrade and safety mechanism, especially for new shooters. And I can tell you that after replacing Remington 700 triggers with Timneys and futzing with breakdown and reassembly, adjusting trigger pull…

The Savage AccuTrigger system is a dream to DIY adjust. It even comes with a little yellow-handled trigger adjustment tool specifically designed for the task.

One of the most concerning criteria for my California wife’s ability to “let” me get our daughters into hunting, was safety … safety … safety. So after countless lectures and online hunter’s safety courses, they both know the dos and don’ts of safe rifle operation—I’ve seen less safety checking from range masters.

And the Savage Muddy Girl .243’s safety makes this pretty easy. It has a sliding tang safety conveniently reached with your thumb, right at the top rear of the rifle stock’s grip. And a big red button tells you if you’ve got it in the correct position.

And yes, both daughters got the safety 101 memo that a safety is a mechanical device that can fail and thus you should never rely on it in lieu of proper muzzle control.

One feature I just love about Savage rifles are the detachable magazines. And the little Muddy Girl .243 has got a great one. It’s easy for small fingers to operate, and makes loading and unloading the rifle much easier than my old Remington shell-scattering bottom drop-plate.

The truth is that most of the time we are hiking to and from stands or observation points and sometimes even when we’re still hunting, we don’t even rack a round in the chamber (an added safety measure). But the girls have gotten pretty conscientious about their safety checks, so that may be changing.

Regardless, the Axis magazine is user friendly and holds 4 rounds of .243 ammunition. And that’s more than plenty of firepower.

With little more than a hex wrench the Savage Muddy Girl .243’s trigger guard can be removed to prepare for disassembly of the rifle. But more importantly, this is how you access the AccuTrigger’s adjustment screw with the provided adjustment tool.

Okay, since we’re talking about the Muddy Girl camo pattern so much, it’s only fair to take a look at the Savage Axis’ stock. After all, that’s where all that Muddy Girl camo goodness is, isn’t it?

Our original Savage Axis Muddy Girl stock is nothing to write home about. It’s plastic, sure. In a $350 rifle, it’s not going to be top of the line. And the foregrip will bend if you put pressure on it. Of course it will.

But that’s important because having the foregrip touch the barrel is how inconsistent vibration happens, and that leads to inaccuracy. Just how much inaccuracy and how much that matters in a gun chambered for a caliber that should probably be limited to shots below 350-400 yards…? Well, that’s a good debate topic for another article.

Let’s just say that the original Savage Axis Muddy Girl .243 stock is mighty pretty to look at, does what it’s supposed to, and as far as accuracy goes… Well, let me tell you a story…

And what came out of that exercise is that her cute little Savage Muddy Girl, absolutely loves inexpensive Federal 100 Grain Power Shok cartridges. As in, all holes touching at 100 yards, loves.

And the entire time I had that little pliable Muddy Girl camo stock attached to a Caldwell bipod at the front sling stud (another big accuracy no-no). And when we hit the woods with that bipod, that accuracy proved out pretty well.

So, I’d say that whatever synthetic polymer Savage used in our “legacy” Axis Muddy Girl .243 was inconsequential to the rifle’s accuracy out to 400 yards. Anyway, beyond that distance, the .243 is the wrong caliber for our purposes.

The materials may not be changed that much. then again, they didn’t need to. But the shape of the newer Savage Axis muddy Girl .243’s stock allows for:

Here are the specifications on the Savage Axis youth .243 Muddy Girl:

For reasons I can surmise, but won’t go into, Savage has combined and aligned its youth and compact lines of Muddy Girl rifles into their “compact” Muddy Girl rifle offerings.

Here’s the specs on those:

As far as I can see, there are a few subtle differences between the old and the “new” Axis Muddy Girls. The new Axis Muddy Girl lineup of .243 rifles:

The Savage Axis has many of the features of it’s more expensive bigger brothers like:

You know, when I read specifications information on a rifle that I’m in love with, I tend to only do it to justify what I know I’m about to do anyway, which is buy the rifle. If you’re like that too, I get it. But this is one instance where, for less than $500, you can get your loved one a great little rifle to start them out, pretend that you aren’t going to love to shoot it too, and introduce a new shooter to hunting all wrapped up in a camo patterned stock that’s undeniably cool.

And to top it off, guess where you can still find one for about $400?

Now, I’m still trapped behind enemy lines in the PRC (People’s Republic of California). And that means that most of my local Walmart stores have since been politically pressured into removing guns from their inventories.

However, back in the day…

Yes, Virginia, there is hope for us all.

When I travel to “free” states, we always stop by local Walmart stores to check out their budget rifles. And most of them carry at least one Savage Axis .243 in, you guessed it, Muddy Girl Camo.

And for about $350 bucks you can pick up one of the best, not to mention coolest, budget hunting rifles out there—Savage Axis .243 Muddy Girl Camo.

So help me, I wish I could buy them all!

For whatever reason, my oldest daughter hates pink. Go figure… So try as I did, she would not consent to me getting her a Savage .243 Muddy Girl camo rifle to match her sister’s. Then, one day while haplessly cruising the sporting goods isles at a Walmart in Oregon, she saw a Savage Axis .243 Muddy Girl Serenity (blue/teal variant) and fell in love with it.

Sadly or luckily, because I love tinkering with rifles, the one thing Savage is still neglecting in their offering of both color patterns of Muddy Girl camo … is a left handed version. And since eye dominance trumps hand dominance in shooting, looks like I’ll have to hydro dip a black-stocked Savage Axis left handed .243 to make it Muddy Girl Serenity for her.

Steve has been a hunting junkie his entire life. Once his daughters were able to go hunting, he relearned why he love hunting so much. Since then, he's taught them everything he learned from his own father about hunting and why hunters hunt.

link to 6.5 Creedmoor VS .308 Winchester (Ballistics and Accuracy)

Is the 6.5 Creedmoor vs .308 Winchester even a debate worth pursuing? Find out which caliber you should buy ... first.

Low recoil is the .243 Winchester's claim to fame, but vs the 6.5 Creedmoor's long range performance and wind-defying ballistic coefficients the 6.5 has become the new caliber darling of the day.

I'm Steve. I've been a hunting junkie for my entire life. Once my daughters were able to go hunting, I started the process of relearning why I love hunting so much. Since then, I've taught them everything I learned from my father about hunting and why we hunters hunt. I've tried to instill in them a deep appreciation for our public lands and the animals we pursue. As an added bonus to that process, we've discovered what gear works and what doesn't. This is the site where we share all of that hard-earned hunting info.

As an Amazon Associate, I earn from qualifying purchases. Camo Crew is a participant in various affiliate networks. Camo Crew is compensated for referring traffic and business to these companies.